Our time is defined by the Internet. The post-Internet takes note of this « spirit of the times » and its paradoxical victory. 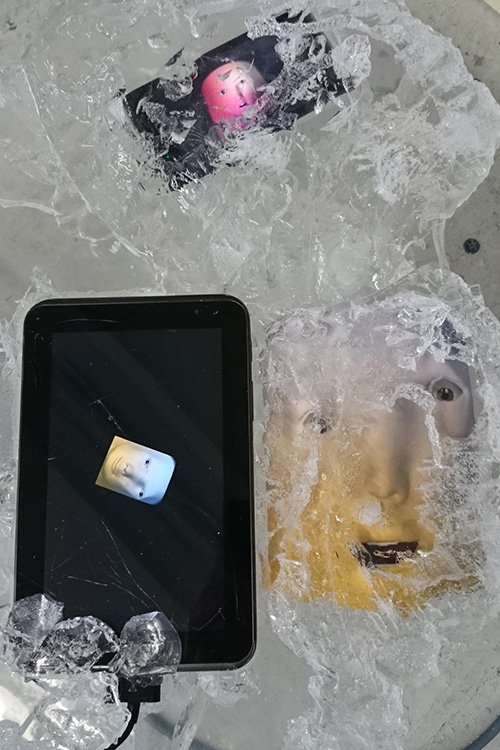 The prefix « post » could suggest the setting up of a chronological time. The post-Internet, so understood, would follow the Internet era. But, just as postmodernity was not after modernity and did not cease to resume and reinterpret the latter, the post-Internet is not after the Internet. It is not the closing, but rather the « victory ». There would be a first period when digital and Internet were magical technologies because they were in the minority. A time of discovery where what was called digital art looked like a Lépine competition and a Barnum circus.

The post-Internet is once the domination of the Internet has been recorded, once the network has become common and constitutes the flow of our lives. The paradox of this « victory » is that by infiltrating our lives on several levels, the Internet becomes inapparent. The network disappears in its use and in its generalization. Internet is no longer considered as a technology, the means of certain ends (artistic for example), but a preponderant part of our common universe, an environment pop just as the mass media constituted the popular one of the second part of the XXth. We recognize by this very fact that the Internet shapes our perception, that is, our aesthetics, and that it constitutes, so to speak, its transcendental a priori: behind what we perceive, there would always be the Internet. The fact that the transcendental structures of perception are inherent in a technological production is an important point because they are no longer, as in Kantian aesthetics, without origin and determination. However, they remain contingent, because technologies cannot be considered as mere projections of our desires, they constitute them in return according to an incessant loop.

In the artistic field, the post-Internet signs the disappearance of the digital art. And if the latter does not disappear completely, at least it returns to its spectacular and naive character, to festivals and socio-cultural events, leaving to the post-Internet the production of a sensitive intelligence capable of returning to its conditions of possibility.

The prefix « post » should be understood less as a chronological marker than as a topological marker: after the Internet it is when the network surrounds us on all sides and constitutes our everyday life. The Internet has become the spirit of our time (Zeitgeist).

Is not this network spirit (Flußgeist) limited to the West? Does it take into account the rise of new players (China and India)? Isn’t the post-Internet the swan song of the Western world? Isn’t it a form of colonialism since the Internet is one of the protocols of the American empire?

The Internet is not only about the digital network, its « spirit » is contaminating the different strata of reality. It is a cascading ontology where the Internet flows into the world. 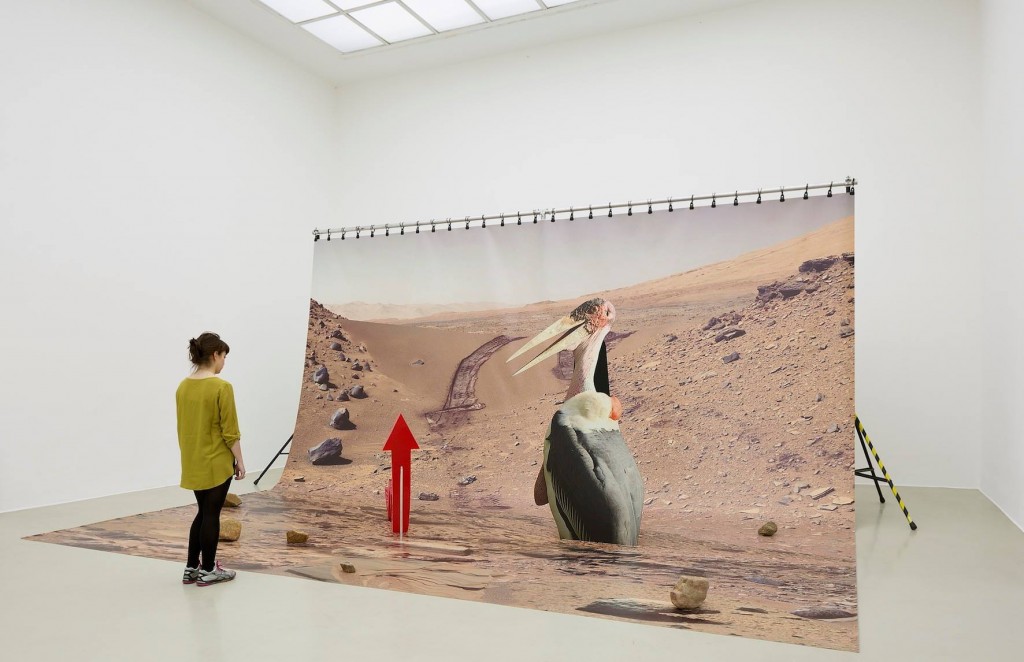 The main difference between the netart and the post-Internet is that the latter invents analog forms of digital and applies to the world structures inherited from digital. Digital is therefore not an ontology separate from the « normal » world, it manufactures ontology, i.e. the ontology as such of the reality in front of which we place ourselves. This transition from digital to analog is linked to the fact that the Internet is not a technology, but an ontological protocol, that is, an order that makes heterogeneous languages compatible.

While it should be noted that the netart has, since its origins, sought to expose itself in spaces of classic demonstration, these exhibitions were most often network installations using screens, projectors, computers and interfaces. Now the post-Internet often abandons this paraphernalia to prefer more classical forms, but which express, in their way, this Internet world.

Cascading ontology is this way of connecting heterogeneous worlds and pouring the Internet into the world, and the world into the Internet. The Internet becomes the smell of the reality in which we are, all the more difficult to locate as the network is transformed and grows faster than our ability to consult it. And no doubt it is in this transfini that we must find the reason for the ontology of the network: as a world, Internet exceeds our capacities, it is greater than our capacities of attention and memory, and this overflow could well be the minimal definition of what a world is.

With the ontology of the network we are (at last) coming out of the immaterialist theories of digital: for a long time the Internet was considered as a form of counter-world, of an imaginary world, of a degraded world because it was a fake. It was opposed to « true reality » according to a logic of the adequacy between reality and truth. But the influence of the Internet on the production of phenomena, on events and on our perceptions makes this immaterialism obsolete.

Thus, the identity fluid on the Internet does not oppose a real « me » outside the network. This fluctuating identity has indeed many influences on the events of my life (amorous, professional, intimate, etc.) It is not a confusion between the true and the simulacrum, it is the capacity of the simulacrum to be something that happens and the original character of it. Placing a cat avatar on his face during a conversation on the Internet is not believing that he is a cat and being in illusion, it is simply synchronizing pixels on his face through facial recognition.

While digital art often tried to create a world apart reproducing the idea of a black box, the post-Internet is the most banal everyday. He tells us about the world as it is lived daily and as it is something common. Art loses its extraordinary and technical character, it loses its naivety that was part of hope in an autonomous world of art.

Don’t we overestimate the importance of the Internet by making it an ontological paradigm? Isn’t this paradigmatic character contradictory with the dissemination of the network? Isn’t there a risk of returning to a hegemonic conception?

The post-Internet is a formal style where originality is not the expression of a singularity, but a resemblance that spreads itself over the network. 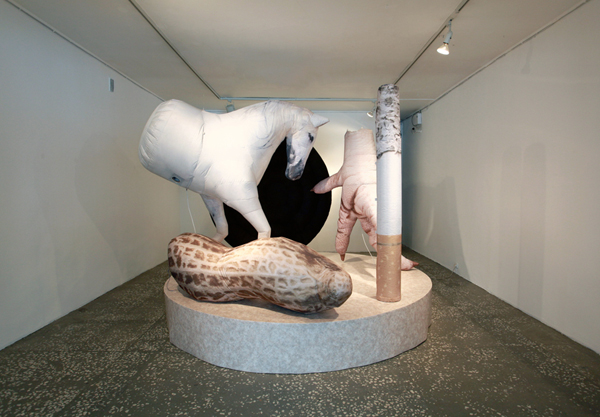 The most remarkable point of the post-Internet is undoubtedly a certain formal homogeneity. We could make the typology of these styles between fluo surfing, cool shapes, office aesthetics, 90’s digital effects, rushed chewing gum, liquid trash, etc..

This homogeneity could be considered as a sign of a criticizable fashion: artists trying to be « in the groove » recopy a form that is not their own. However, this resemblance goes beyond the framework of a singularist conception of the work of art in which it is individual in the manner of the individual artist who should be singular. This resemblance is a metastructure of the post-Internet that spreads itself over the network. Any work could be a copy or be copied, the circulation game is endless and it would be absurd to try to discover the origin of a form by attributing it to such or such artist. It is simply a matter of feeling how artists singularly appropriate forms that are not singular. The question is no longer aesthetic (public) but poetic (artists).

The post-Internet already constitutes the sensitive form of our time and if this form seems to be inspired by pre-existing forms in the field of contemporary art, they are articulated in a new way, articulation which testifies to its originality.

One can of course be suspicious of a style adopted by mediocre artists who apply a recipe and degrade its springs to make a « bling bling glitch ». But some artists seem to have met in a profound way the style of that time. Its particularity is to be nostalgic for a recreated time. We are struck by these images that resemble so much those of the 80s and 90s as if we found in this sequence of time a way of archaism. But we do not reproduce the images of the past identically, we draw inspiration from them to transform them and create what in the musical field we would call a revival. Everything happens as if we saw for the first time the potential of a past era, as if we had had to wait decades for the 80s and 90s to mature and paradoxically appear to us as a moment that did not take place, but that could have taken place. The production of the new (technological innovation) then seems terribly old.

The similarity of the post-Internet works will impose a very selective historical sorting: few artists will remain because this similarity expresses the increase of the artistic offer and, in a general way, the appearance of the memory of the anonymous as a phenomenon transforming the very production of History.

ps: This short text does not mean that the notion of « post-Internet » suits me or that it seems safe to me. One could easily assume that it refers to practices well before its media utterance and that many netart practices, far from being closed on the network, had exactly the same objectives as those stated here. The success of this notion remains at least symptomatic of a social maturation of certain artistic problems.